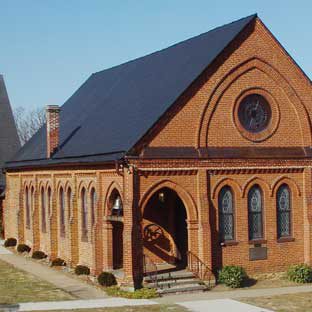 Waterford’s Presbyterians have a long history in the Waterford area. In 1760, Amos Thompson, a graduate of The College of New Jersey [now Princeton University], was sent by the New Brunswick Presbytery as a missionary to Virginia. Thompson organized two churches: Gum Spring, near Arcola, and Waterford’s Catoctin Presbyterian Church, which was organized in 1764-1765. The Rev. Thompson later left his ministry to serve as a chaplain in the Continental Army.

The first Presbyterian church in Waterford was built on land sold for four shillings by member John Cavins on April 7, 1769, to the trustees of the church for a school, house of worship, or a burying ground. It stood south of Waterford at what is known locally as the Fox graveyard at the intersection of routes 703, Hurley Lane, and 665, Clarke’s Gap Road. That log church stood into the 1820s although the Presbyterians stopped using it in 1814 when the congregation moved into Waterford on the present site. All traces of that early structure have disappeared, but 11gravestones remain.  The last burials were in 1881.

Lots 2 and 3, upon which the present church stands, were conveyed to the Catoctin Presbyterian Organization in 1814, by Mahlon Janney’s executors, as part of his “New Addition” auction, for $104.50. A church of brick with a gallery on three sides was erected and served intermittently as a place of worship until destroyed by fire in 1878. Under the leadership of Dr. L. B. Turnbull the present church was built on the same site in 1882. Close observation will reveal that the façade and front bay of the church is constructed with modern, machine-made brick of a uniform red color, while the remainder of the sides of the church is constructed of hand-made brick of varying colors. It is likely that these were the bricks salvaged from the previous church.

The church’s interior has a wooden ceiling with false beams reflecting the Gothic style of the building. Wooden pendants which hang from these beams resemble the “acorn” motif that top the ladder backs of Waterford chairs. On the wall behind the pulpit is a round stained glass window. The sides of the church have lancet arched stained glass windows with clear glass transom windows below. These windows were most likely installed in the twentieth century.

In 1950 the congregation added a church school building to fill the education and recreational needs of the community; the congregation continues to share the use of this building. Reverend David Douthett has been the pastor since 2004.  History, tradition, a farming legacy and close-knit fellowship are vital parts of the church today.

The Catoctin Presbyterian Church is open courtesy of the grace of God and 250 years’ worth of faithful members.