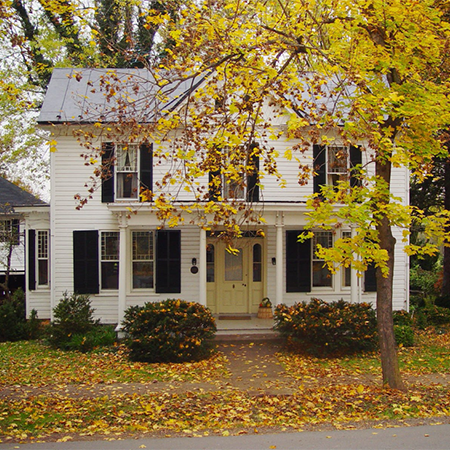 Throughout most of its history, Waterford was a relatively isolated community. One result of this isolation was that architectural styles arrived later in Waterford than in many other parts of the country. The Flavius Beans House illustrates this delay. It is a fine example of mid-Victorian architecture, although Flavius Beans did not have it built until about 1890.

The architectural details are more elaborate and “prettier” than would have been the case earlier; for instance, around the edges of the upper sash of each window are small square panes. The gabled pediment along the front roof line has a turned peak ornament at the top and decorative shingles within. The windows in the side pediments have small square panes, also surrounded by decorative shingles. Notice also the jigsaw trim above the bay window and the dentils and brackets. At one point there was probably more of this “carpenter Victorian” trim, which was removed as succeeding owners tried to keep up with the newer styles.

The high style of the Flavius Beans House is evidence of the economic strength of Waterford in the late nineteenth century. It also reflects the availability of commercially cut and sawn timber as a result of the extension of the railroad through nearby Paeonian Springs.

The Flavius Beans House property is open through the courtesy of Mr. and Mrs. Nicholas Ratcliffe.