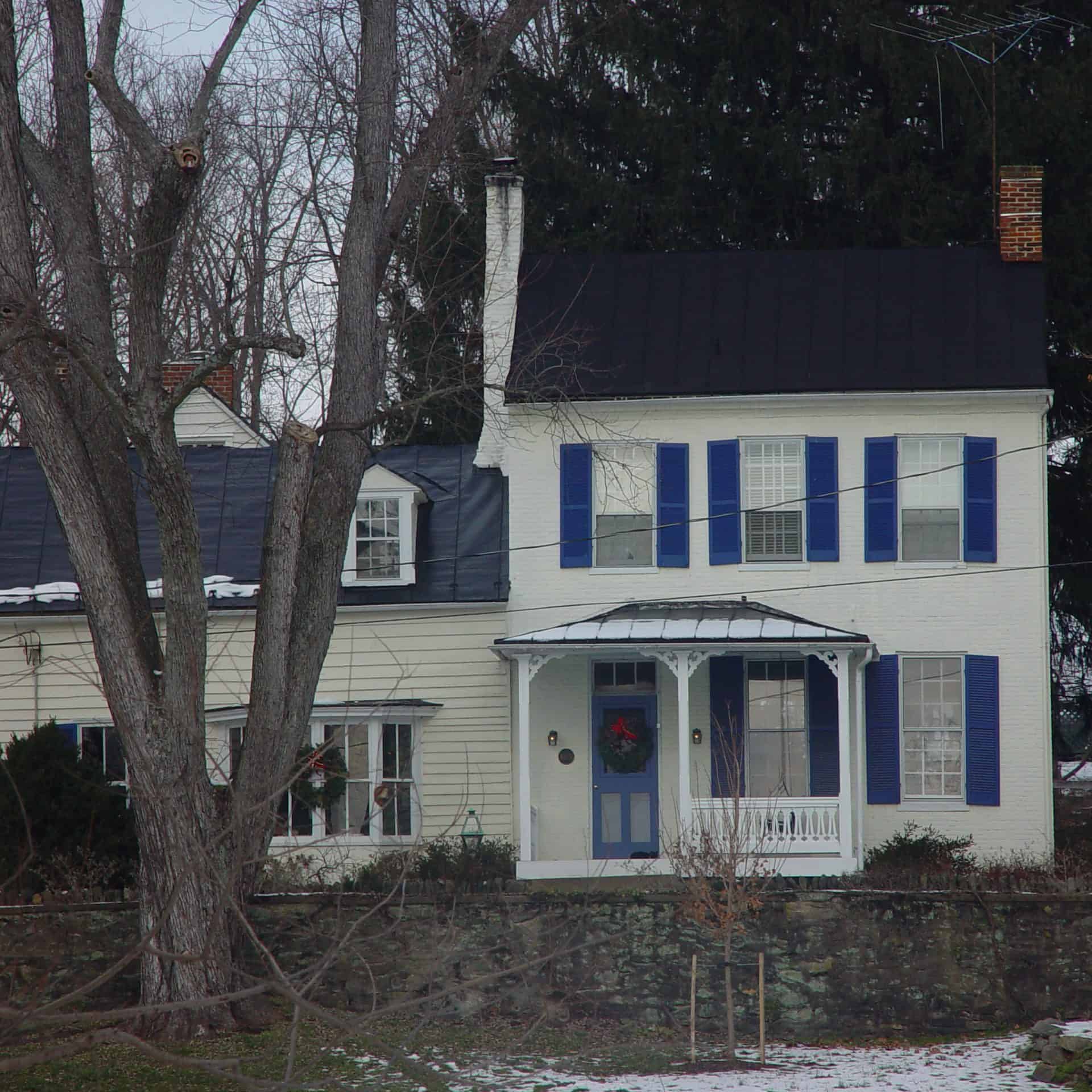 Joseph Janney (c. 1740-about 1793), a Quaker merchant and near relative of Amos Janney, Waterford’s founder, built a log structure here between 1781 and 1784. When Janney moved to Strawberry Vale, his farm a few miles north of the village in 1785, this house was purchased by Thomas Moore, Jr. Thomas’s brother Asa, a tanner, bought the property in April 1799 for 400 pounds. Asa and Thomas Moore Jr.’s sister Elizabeth married Joseph Bond. The Bond family, who married members of the Moore and Phillips families, then made this their home, with periodic additions and alterations, until 1886.

Joseph Janney, although he died relatively young, made his mark as a strong eighteenth-century real estate presence in the village, along with founder Amos Janney, and his son Mahlon. Joseph purchased 12 acres from Francis Hague’s estate in 1781and began selling lots on both sides of Main Street, nearly to the center of town; these boundaries remain essentially unchanged today. He built a second house on one of his lots, now the Joseph Janney house at 40154 Main Street, after selling this house. His will, probated in October 1793, left numerous town and country properties to his widow and several children.

This particular house, on one of the oldest settled streets in the village, was insured by its subsequent owner Thomas Phillips or his heirs in 1803, 1805, 1816, 1827, 1845 and 1859. Copies of these insurance policies are available at the Waterford Foundation Archive and Local History Collection. As of 1803 the Mutual Assurance Company of Virginia described it as a “two-story frame house, 17 x 24, with a one-story brick wing 17 x 23”; it was insured for $1,100.

Relatives by marriage James Moore (brother of Asa, Thomas and Elizabeth, above) and Thomas Phillips ran the tanyard in front of the house in Bond Street Meadow. Eventually “Back Street” was renamed “Bond Street” in the family’s honor. Asa Moore Bond was the final owner of the tanyard, which lasted into the 1870s.

About 1900, Ernest Linwood James bought this house and eight acres. His family sold the property upon the death of his daughter Eleanor in 1986. The Waterford Foundation, fearing the land would be developed, purchased it, selling two home sites and two of the historic homes (Janney Phillips and Asa Moore) to finance the purchase of the remaining land, barn, ice house and meadow.

The Janney-Phillips House is open through the courtesy of Abbie and Bowman Cutter.