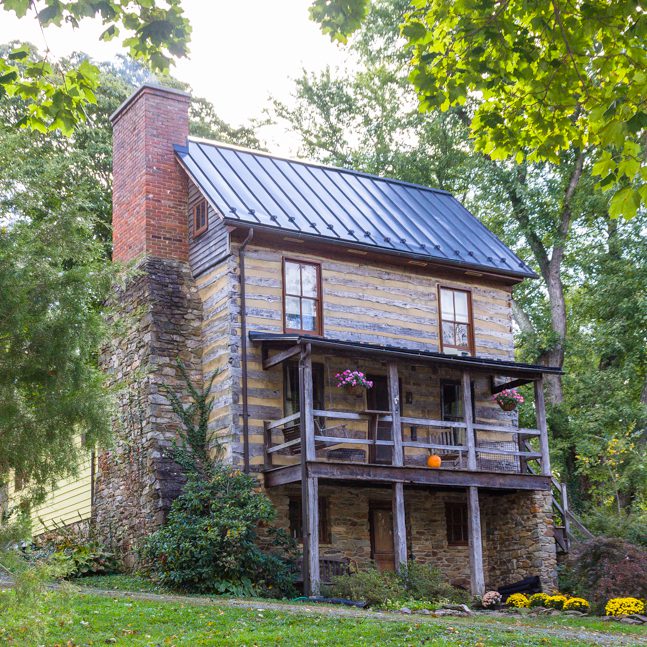 Trouble Enough Indeed was brought to Waterford and reconstructed from 1970 to 1980 by William and Carol Hunley.

Visitors to the Waterford Fair in the early 1970s enjoyed watching Trouble Enough Indeed take shape from the components of two log homes ca. 1850 and 1886 from Lewisdale in Montgomery County, Maryland, and an 1876 frame house from Mathews County, Virginia.  Located about three miles apart at Lewisdale, the log houses were tobacco farm houses.  The name comes from the registration of the front wing of the house in the Montgomery County deed book.

The house has been featured in Parade Magazine, in the Washington Post and on NPTV.  It has been a frequent subject for painters and passing photographers.

The log houses were dismantled and every log, stick, stone and brick moved to Waterford, cleaned and returned to its original place in the house.  Even the nails were reused.  The log construction is German “V” notch and logs were stacked one on the other with no fastenings except in the top ring of logs on which the roof rests.  In addition to the log houses and the frame house, artifacts from many well-known buildings are built into the fabric.

The dining room fireplace contains the brick from the log house, and on one side there is a brick from the old church at Jamestown.  One the other side, there is a brick from Bruton Parish Church in Williamsburg.  The handmade bricks each show the print of the brick maker’s thumb from being turned when drying, and several contain cat and deer tracks made while the bricks were still soft.  The long-leaf pine heart flooring and the dining room ceiling beams were salvaged from the Carlyle Apartments that were built in 1819.  Many of the doors, windows and replacement timbers were salvaged from the house built in 1876 by William S. Hunley, shipwright, farmer and oysterman, at Retz in the Kingston Parish Glebe in Mathews County, Virginia.  Several of the doors were made in the family shipyard and are fastened with boat nails.

Trouble Enough Indeed is open through the courtesy of  the current owner Margo Noel.