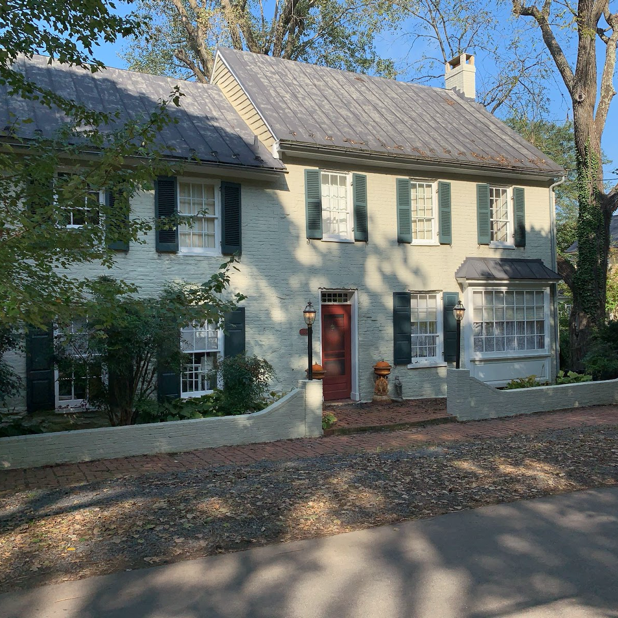 Renowned saddler Asa Brown (1794-1872) lived here in the 1850s and 60s. The Civil War split his large family down the middle. “Plucky” Asa, a veteran of the War of 1812, was a loyal Unionist, as was his son Turner and two daughters. Sons Charlie and “Ab” were “rabid secesh” as was wife Aurena and a third daughter. Turner and Charlie had to be kept from killing each other, but all managed to survive the war, though Charlie took a Yankee bullet at the First Battle of Bull Run.

William F. Myers built the northern end of the house in 1850, and both halves (two separate dwellings) were sold to H.C. Bennett in 1876. From 1919 to 1959 the property belonged to the H.B. Parker family, another feisty bunch. Harvey, a blacksmith, came home from WWI, feuded with his brother Fred, who had run the smithy in his absence, and the two never spoke again. Mr. and Mrs. John G. Lewis purchased the property in 1959 and restored and finally united the two residences as one called the Parker-Bennett House.

Mr. and Mrs. William Chewning added a west wing in the 1970s, granting an easement to the Virginia Historic Landmarks Commission.

Mr. and Mrs. John J. Donovan built a second western addition in 1989.They also purchased three and one-half acres of pasture at the rear of the property in 1991 and granted a protective easement to the National Trust for Historic Preservation.

The Ephraim Schooley property is open through the courtesy of its current owners, the Manch family.