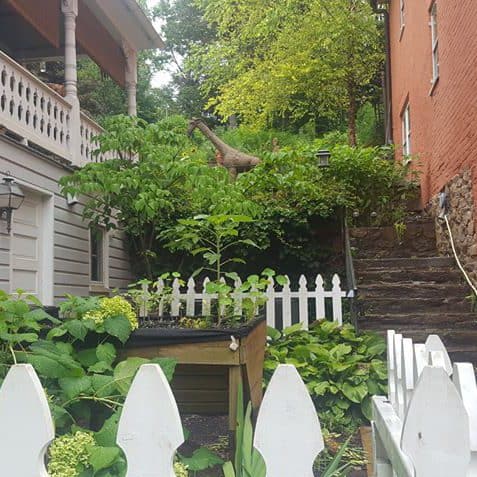 The ground floor of this home was built “as a ware-house” by Quaker John W. Williams (1771-1840) proprietor of a general store across the street, now the Waterford Post Office.
Williams, one of the first four commissioners of a fledgling Waterford in 1801, was much involved in the early life of the village that was finally incorporated in 1836. Active also in the affairs of Fairfax Monthly Meeting, he and his son William (1816-1892) along with other members of his family, would play a large role in the development of Waterford through the 19th century.
The upper floors, built later, were added possibly after December 1832, when tailor Phineas J. Steer, then in a smaller shop nearby, advertised in the Genius of Liberty, a Leesburg newspaper:

“Journeymen Tailors Wanted.
The subscriber wants, immediately, two first-rate Journeymen Tailors,
to whom he will give constant work, and good prices.
An apprentice also, of good morals, and between the ages of 12 and 15 years, will be taken.
PHINEAS J. STEER.
Waterford, 12th mo. [December] 1st, 1832.”

Two years later he advertised his growing business in the same paper:

Phineas J. Steer,
Informs his friends and the public, that,
having taken the stand formerly occupied as a ware-room, between Dunham’s Store and Klein’s Tavern,
he is prepared to wait upon them, both at the stores and at his shop;
where he will thankfully receive their
TAILORING:
Fine or coarse, imported or home-made—
pledging himself that none shall surpass him,
either in cheapness or excellence of workmanship.
Persons about to get clothes, would do well first to give him a call.
Waterford 1st 3d mo. [March] 1834

A succession of owners followed, some residing there, others renting out the space. An 1853 village map names William Nettle, a fine Pennsylvania carpenter residing on Second Street, as an owner, and another map of 1875 showed Nettle’s widow Sarah still owning it. Mr. John Rollison, owner of the Hardware Store on Second Street, later purchased it. Long-time residents remember Mr. Rollison walking to the town pump for his water as long as he lived there. Richard and Elaine Head bought it after Mr. Rollison died in 1986, hoping to update it but changed their plans and sold it a few years later. Richard Storch modernized the house, adding plumbing, among other amenities.

The Iron Store House is open through the courtesy of Susanne Page.